In the aftermath of the Capital Gazette shooting, local reporters in Annapolis have told a story of their dedication to covering and being a part of their communities.

Advance Local, which runs news outlets from Massachusetts to Oregon, Alabama to Michigan, has been working on an initiative on how best to bridge polarized communities.

After Parkland, the news group focused on guns. Advance chose 21 people from more than 900 applicants — people formed by gun culture or victimized by gun violence — for sessions in Washington. The sessions were led by conflict-resolution experts and emphasized active listening techniques and non-confrontational ways of understanding.

“This whole thing was started by the Parkland students, but it was all about opening” ways of thinking, says Michelle Holmes, vice president for content of the Alabama Media Group.

In just three days, in Washington, the diverse strands of those 21 people had changed from “us” — people who shared one point of view — to an “us” that included all 21 of them, Holmes said. The 21 even formed their own Facebook group to talk among themselves on issues.

Now, Advance is moving to another initiative, what Holmes calls a modern “pen pal” project to match up two people on different sides of an American divide for frequent emails, talks and dialogue on positions.

The Advance Local effort is just one of several trust-building initiatives you’ll read about below and in a Poynter media roundup later this week.

NEW THIS MORNING: Quartz is being sold to a Japanese company, The Wall Street Journal's Ben Mullin reports. Uzabase Inc., a Japanese financial intelligence and media firm, will pay between $75 million and $110 million for the business site, based on it hitting certain financial goals. The site was founded six years ago by Atlantic Media.

IN THE AMBULANCE: Capital Gazette reporter Rachael Pacella told Brian Stelter that she had one weird thought after the gunman invaded her newsroom and started shooting. Injured herself, she was in an ambulance when she thought: Would we get a paper out tomorrow? Another reporter who survived the attack, Joshua McKerrow, told CNN that he was going to rededicate himself to covering “my town, my neighbors,” with a goal of spreading empathy.

TWEET OF THE DAY: It’s for this story from Annapolis. (h/t: Doris Truong) 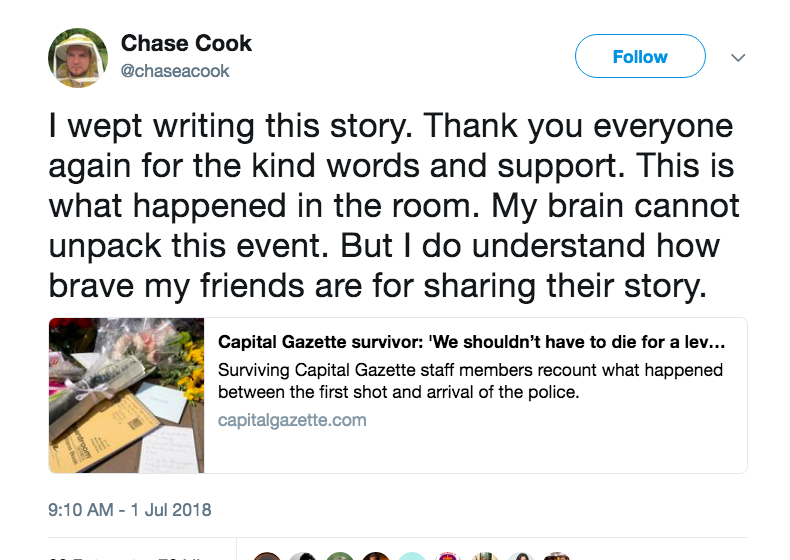 A BETTER JOB EXPLAINING: What is it exactly that a journalist does? “Our role as public servants is not obvious to our communities. Our motivations and mission are misunderstood,” Joy Mayer, of Trusting News, tells Poynter’s Indira Lakshmanan.

TOUGH TIMES FOR STUDENT JOURNALISTS: High school educators across the country have been clamping down on students who publish articles on protests, sexuality and other hot-button issues.

THAT MISSING SQUIGGLE: The tilde above an “n” in Spanish can make all the difference between “the year of the woman” and the “anus of a woman,” as NPR found out last weekend. Critics applauded the swift correction of this tweet to NPR’s 7.59 million followers but said it exposed the need for more Spanish-language speakers at NPR. 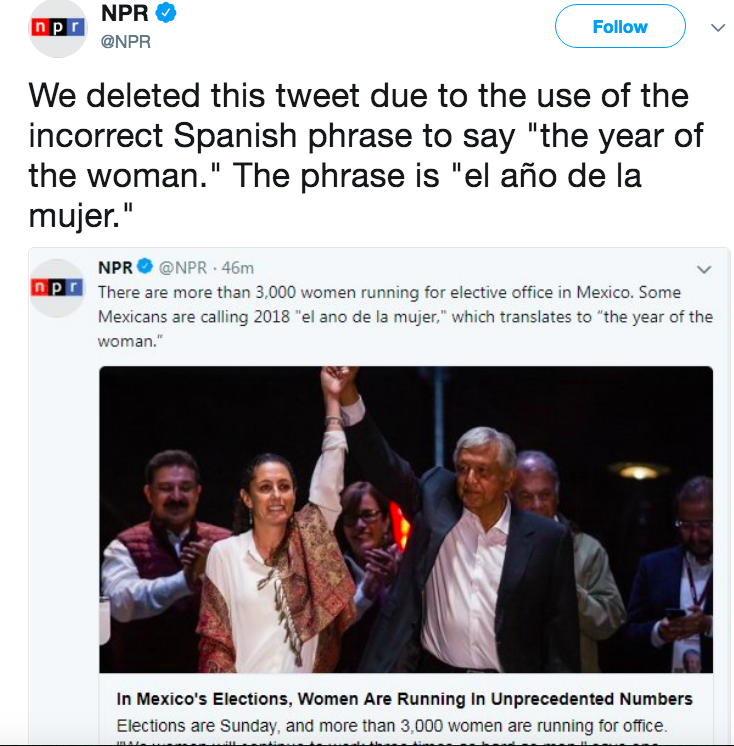 TARIFFS DESIGNED TO HURT TRUMP AMERICA: Canada acknowledged targeting products made — and jobs done — in areas of the U.S. that voted for Trump, who has instigated a trade war with its closest ally. Also targeted: Swing states and areas represented by Trump’s servile congressional allies, such as Sen. Mitch McConnell and Rep. Paul Ryan.

CHANGING THE NARRATIVE: Amanda Ripley, after months of work with conflict-resolution experts, thinks journalists need to tell stories differently to break through to a broader audience in a polarized age. After two decades of her own work, Ripley concluded: “I have overvalued reasoning in myself and others and undervalued pride, fear and the need to belong.”

NO MORE SILENCE: In her New York Times op-ed, “Let’s Talk About My Abortion — and Yours,” Cindy Leive mentions that one in four American women have had abortions — and that silence has made it easier for opponents to grow in influence, and for menacing myths about abortion to thrive. “Would it be quite so easy to demonize this common experience,” she asks, “if it were clear that the women who have gone through it include kindergarten teachers, clergywomen, Republicans, CEOs, the woman who served your coffee this morning, who cleans your house, who signs your paycheck, who patrols your neighborhood?”

Thanks to Ren LaForme for editing this.

Fact-check: Is Kanye polling ahead of Biden and Trump in Kentucky?

Welker moderated the debate with a firm hand, and yet a light touch. The result was a debate that looked like, well, a debate.

Carlson mischaracterized the work Brandy Zadrozny, an investigative reporter who has been reporting on conspiracy theories.

The ‘poison pill’ holding up a U.S. stimulus agreement

Plus, a second look at the CDC's new close contact definition, prisoners may get stimulus checks, patio heaters are in short supply, and more.

PolitiFact
Back to News