Journalists from 4 nations with 1 goal: Lets find these kids

Crowdsourcing effort aims to reveal what the U.S. will not

Where did these kids go? Every newsroom was asking the same question, says Ariel Kaminer — but now 10 news outlets, from four countries, are joining together to crowdsource the location of family members separated at the border by U.S. policy.

The partnership brings together Kaminer’s BuzzFeed News with Univision, The Intercept, the Texas Tribune, Frontline and ProPublica, which designed a map and online tool to determine where those migrants and asylum seekers have been taken.

The outlets got together to crowdsource this information because actual information on the children "was hard to come by" and state agencies weren't getting federal help, says Jessica Garrison, a senior BuzzFeed News investigative editor. Frontline said Thursday that it will use material it gains in an upcoming documentary.

Enrique Naveda of Plaza Pública, which has been covering this issue for much of its seven years, says his site will use its connections with Guatemalan migrant families, many fleeing violence at home, to deepen the storytelling from home and from the U.S.-Mexican border. "We are also looking for further information to find stories that can help us fathom the depth of what is going on," Naveda, the site's general coordinator, says in an interview.

The partners will offer communications via secure methods. "We're inviting people to use the online tool … or to reach out to us through our tips line or secure messaging, to help us tell the stories of people who are affected by this policy and to hold accountable those who oversee it," says Kaminer, a senior investigations editor at BuzzFeed News.

Here’s more on the effort from a separate post, and here are the callouts in English and in Spanish. So far 99 facilities housing immigrant kids have been located and 78 of them mapped, ProPublica said Thursday night.

TWITTER TAKES FLIGHT: As improbable as it once seemed, the social media company is gaining users and advertising — and its stock has tripled in two years. BuzzFeed's Alex Kantrowitz investigates.

THE LONG GOODBYE: Let’s face it, argues Slate’s Will Oremus: Facebook is pulling out of the news business. At Slate, he writes, “traffic from Facebook plummeted a staggering 87 percent, from a January 2017 peak of 28 million to less than 4 million in May 2018. It’s down more than 55 percent in 2018 alone.” Here's what it looks like (used with permission): 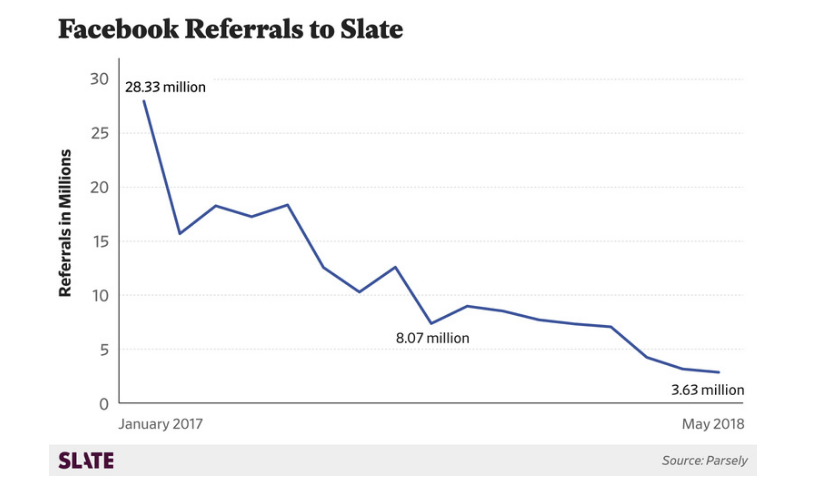 FROM A PRISON CELL TO THIS?: The Washington Post’s Jason Rezaian survived a dictatorship to come home, but he sees the travel ban as a move that could be used to diminish the 1 million Americans who share his Iranian heritage. “Can we really consider ourselves to be equal citizens?” he writes.

TV NEWSROOMS: A top finding of this year's RTDNA/Hofstra TV newsroom survey — "The percentage of women and people of color in TV newsrooms and in TV news management are at the highest levels ever measured, but while the minority population in the U.S. has risen 12.4 points in the last 28 years, the minority workforce in TV news is up just 7 percent." Here's the full report.

MEMBERSHIPS: The Daily Beast is pivoting to a $100-a-year membership for early and premium content, according to Digiday’s Lucia Moses.

JUSTICE DEFERRED: For 34 years he lived freely, bragging that he once killed a black man and got away with it. Not any longer, writes Cleve R. Wootson Jr.

THEY KNEW: The makers of Oxycontin understood its enormously addictive qualities and widespread abuse almost from the start, but the NYT’s Barry Meier says it hid that information — and kept pushing the drug.

FOR ALL THE MARBLES: The retirement of Justice Anthony Kennedy is the most significant event on the Supreme Court since its decision on the 2000 presidential election or even Roe vs. Wade in 1973, writes former Bush White House official Jack Goldsmith. “His departure leaves the future of U.S. constitutional law entirely up for grabs.”

TWEET OF THE DAY: From Los Angeles Times photographer Jay L. Clendenin, on his new office: Got a tip, a link, a suggestion, an amazing tweet? We’re trying to make this roundup better every day. Please email me at dbeard@poynter.org.

Thanks to Kristen Hare for editing this.

And have a good Thursday.

Editors' Note: This story was updated to add the Guatemalan outlet El Periódico to the consortium of news outlets mapping out possible locations for children and parents separated by U.S. officials.