Morning Mediawire: Finding the practical in the local, a new tool to fight online harassment, how 4/20 began

From nuclear hideouts to your stoves, what Lifehacker could teach local editors

For the past year, Melissa Kirsch has been running a site that has been growing fast, even in times of greater cynicism and division, by offering expert views embraced by earnest, engaged audiences.

And there’s no reason, she says, that local news sites can’t adopt some of what she’s learned at Lifehacker.

“There is so much noise, so many people chasing the same stories,” says Kirsch, whose site is a bright spot in Univision’s turbulent Fusion Media Group. “The question that we always ask ourselves is, ‘How can we be of use? How can we help? … If people are confused, how can we explain it?’”

Some of the site’s biggest successes of the past year are eminently localizable: Where to Hide If a Nuclear Bomb Goes Off In Your Area, granted an extreme example; or Take Photos of Stove Dials Before You Leave for Vacation. One story in this roundup today looks at an experimental program giving a universal basic income ($500 a month) to residents of Stockton, California. Would that idea work in your community?

Local news sites have the power of the audiences at their fingertips, Kirsch says, echoing engagement experts such as Jennifer Brendel of Hearken.

“Everybody’s an expert on where they live,” Kirsch says, “and we’re all secret know-it-alls, and want to be of use to each other.”

How do you ignite that power? Hire for curiosity, she says. Hire informative, entertaining reporters who sweat and geek out over the details, who like talking with their community. Hire people who can really connect with the sincerity and optimism of some readers, listeners and viewers. Hire people who understand your audience, and know that readers, as Kirsch puts it, “are asking themselves, ‘How can I live my life better?’”

Lifehacker works “on sort of a positive angle,” she says. “That doesn’t mean not having an edge, or not having personality or wit.”

Startling research findings have preceded today’s launch of an online harassment tool and guide by the writers’ group PEN America. The organization found that of 230 writers they surveyed, two-thirds of them reported severe reactions to online trolls, including fears for their personal safety and decisions to refrain from publishing their work. Some deleted social media accounts, and more than a third reported avoiding certain topics in their writing. Predictably, trolls attacked writers based on race, ethnicity, gender and sexual orientation as well as for their viewpoints.

"In this instance, it was just that I was a Jewish woman who was conservative and didn’t like Trump," editor and columnist Batheny Mandel told PEN America. "A homegrown, anti-Semitic website also published my photo with a picture of a target on my back and what they thought was my home address, along with my actual cell phone number."

Suzanne Nossel, PEN America’s CEO, said stories such as these led to its Online Harassment Field Manual. “When certain voices are muzzled, when people choose not to write about topics that matter, and when they remove themselves from the public debate, everyone loses,” Nossel says.

The manual lists advice, guidance, and resources on cyber-stalking, doxing, hate speech, and other forms of digital vitriol. The goal: Give writers, journalists and others the best available methods and means — including help from employers, law enforcement and tech companies — to protect themselves and secure their own freedom to write.

The manual is available here.

SAVE STUDENT NEWSROOMS: Up to 87 college newspapers and news sites will take part in an effort to raise funds and to remain independent of university oversight and censorship, says Caitlin Ostroff, a managing editor of The Alligator, the student newspaper at the University of Florida. On Thursday, the Society of Professional Journalists endorsed the nationwide effort. Its campus representative, Ohio University's Hayley Harding, said "student media present huge opportunities for the growth and development of the next generation of journalists." The stakes are high. The University of Toledo's paper editorialized that it is dying, and Southern Methodist University is just weeks away from taking over the independent student paper unless alums raise $125,000 to save it, a former student editor there, ProPublica's Jessica Huseman, said in an interview. (We'll have more on this next week.)

THE 77-YEAR-OLD GANGBANGER: Chicago’s gang database is full of errors. ProPublica Illinois’ Mick Dumke explores the 128,000 people gathered in the database, which seems to be more of a racial profiling mechanism. (Hat tip: Adriana Gallardo)

COHEN BACKS OFF LIBEL SUITS: Embattled Trump attorney Michael Cohen has withdrawn lawsuits that he filed against BuzzFeed and Fusion GPS over the so-called Steele dossier. According to Politico, “Dropping the suits could help Cohen avoid being questioned by lawyers from Fusion GPS or having to turn over evidence related to the case — both steps that could undercut his defense in the criminal probe.”

BY BARACK OBAMA: A former business journalist returns to the field for this essay on the Parkland, Florida, students leading a nationwide effort to make schools safe from guns. “Our kids,” Obama writes for TIME’s 100 Most Influential People, “now show us what we’ve told them America is all about, even if we haven’t always believed it ourselves: that our future isn’t written for us, but by us.” Here are the whole dang 100 interesting people. Be sure not to miss Newt Gingrich’s paean to Sean Hannity. It’s the ultimate in short writing. (Hat tip: Alexios Mantzarlis, who we find interesting.)

GOOD BREEDING: '"Breeding’ as a concept has an animalistic connotation. Dogs and horses are bred. So (Trump’s) use of it is, at best, dehumanizing to the immigrants he appears to be referring to," writes CNN’s Z. Byron Wolf. The network’s political director notes that “fear of immigrants from certain countries ‘breeding’ has been a staple of nativist thought for hundreds of years. The ‘breeding’ fear has been affixed to Jews from Eastern Europe, Catholics from Ireland and Italy, Chinese and, now, Latinos, Filipinos, Africans and Haitians.” Apparently excepted from Trump’s rhetoric: Germany and Scotland, where his immigrant grandfather and mother were born.

TAMPA BAY LAYOFFS: “Approximately” 50 Tampa Bay Times staffers will be laid off. The primary reason? An up to $3 million increase in newsprint costs because of a trade tariff against Canada, Poynter’s Kristen Hare reports. “When you use a lot of newsprint, these additional costs matter a lot,” said Paul Tash, chairman and CEO of the Tampa Bay Times.

PUTTING THE ‘FIRE’ IN FIRED: James Marcus, recently dumped as Harper’s editor, says one reason for his dismissal was his rejection of an “exceedingly mediocre” essay that slammed the #MeToo movement on Twitter. He was overruled on that widely disparaged essay, which became the magazine’s March cover. Marcus also said he refused a severance payment because it was tied to a “non-disparagement clause.” A Harper’s spokeswoman disputes that Marcus was fired over the essay.

THEY ‘SHOT’ AT THE REPORTER FOR FUN: The Wall Street Journal’s John Carreyrou revealed that now-disgraced pharmaceutical Theranos was misleading people about its technology. So the company made an in-house “Space Invaders” game, letting employees shoot at little “Carreyrou” heads, Business Insider reported. Employees even F-bombed Carreyrou at a company meeting, the reporter says in a book coming out about the company. Another nugget: David Boies, the once-respected lawyer who tried to strong-arm publications not to run stories about Trump hush money or Weinstein sexual abuse, was also hired by Theranos to try to discredit the Wall Street Journal reporter. Morning Mediawire would be irked if some company did all this, but Carreyrou made light of it in a tweet: STARBUCKS EXPLAINED: Slate held a roundtable to weigh in on the arrest of two black men for the "crime" of not ordering as they waited on a friend. From Jamelle Bouie: “I’m not sure that I had any reaction beyond, ‘Ah, another example of black people getting arrested for the crime of —checks notes — ’existing in public space.’” From Aisha Harris: “Same. I think my blood boiled for about 10 seconds, and then I was like, ‘Welp, white people gonna white.’” ICYMI, here’s the Karen Attiah essay I raved about Thursday.

WATCHING YOU: Your data. Peter Thiel’s sticky fingers. What could go wrong? “Palantir Knows Everything About You,” by Bloomberg’s Peter Waldman, Lizette Chapman and Jordan Robertson. (Hat tip: Amy Webb)

JUST THE FACTS: Mexicans help create new jobs for Texans, not take away jobs from them, says a new study by Southern Methodist University. By Alfredo Corchado of the Dallas Morning News.

THE STOCKTON EXPERIMENT: A California city will begin giving each resident $500 a month for a year. Here’s why: The case for Universal basic income, by Lifehacker’s Leigh Anderson.

MARIJUANA FOR EPILEPSY?: For the first time, an FDA committee unanimously voted for a marijuana-based medicine. This medication is to help with two rare and devastating forms of epilepsy, STAT’s Andrew Joseph reports. The vote is not the final approval, and the next action is expected in late June.

RELATED: WHAT DAY IS IT?: Five stoners in a Northern California high school created a code on when to meet after school for smoking adventures. Then the Grateful Dead picked it up … and now it's "a day." The story of 4/20, or #420, by the AP's Paul Elias and the five "creators" — who each have a lifetime supply of Lagunitas. (Hat tip: Sarah Parvini)

‘I DO NOT GET CONFUSED’: Dana Perino told “The View” how U.N. Ambassador Nikki Haley called her to tell Fox News viewers that White House officials — not Haley — got it wrong. Perino was referring to the weekend mixup when the White House said Haley was confused about getting tough with Russia after the chemical attack on civilians in Syria. What really happened was that Trump changed his mind, deciding to go soft on Russia, and no one told Haley. “I know they were trying to protect the president, but at the same time, they’re hurting her,” the Fox News commentator said. On another issue, Perino credited former Democratic strategist and leader Donna Brazile for helping get New Orleans rebuilt after Hurricane Katrina in 2005. According to Perino, then a Bush White House spokesperson, Brazile, a Louisiana native, came to the Bush administration and said the crisis was beyond politics and that Hillary Clinton would work with Bush to push through funding to help hurricane victims.

‘KATY PERRY WANTS A PAPER’: After this tweet, the Washington Post scrambled, sprinting to the pressroom, hurrying robots, fumbling with stamps, rushing to a mailbox — all to give Katy Perry the print newspaper she wanted. Here’s the suspenseful, heart-throbbing video, by the same people who brought you The Cookie Monster in a Post story conference. Oh, almost forgot — there was this personal note, too, from the paper’s editor … 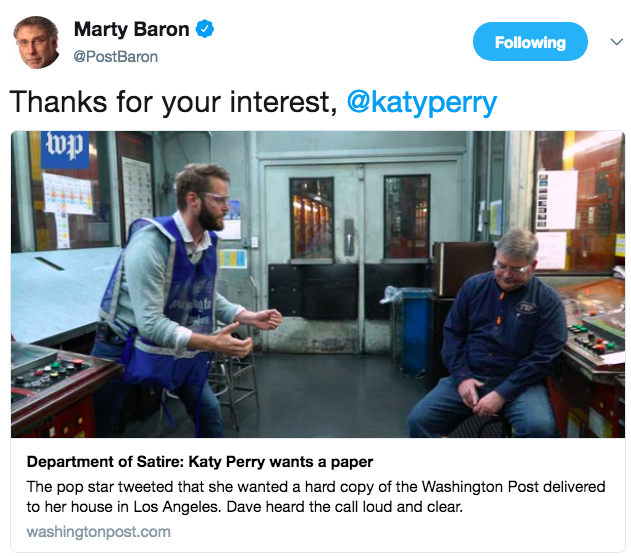 It’s not exactly bringing down a president, but it’s one more paying subscriber.

Have a good Friday — and a good weekend.