COVID-19: Poynter Resources
Home Newsletters Morning Mediawire: In Oregon, a challenge to a tiny weeklys core, and a big award
By: David Beard

Les Zaitz had been out on his Oregon ranch last week when he got the heads-up call from Matt Apuzzo of the New York Times. Zaitz’s 1,500-circulation weekly newspaper would be winning an Investigative Reporters & Editors award. But he couldn’t tell anyone yet, said Apuzzo, an IRE judge.

“My celebration,” Zaitz said Tuesday, “was to go out and give the horses some extra hay.”

Announced on Monday, the IRE Freedom of Information Award to Oregon’s Malheur Enterprise was the first such prize in the category’s 20-year history given to a weekly paper. “This work is proof that you don’t need a large staff and deep resources to move the needle,” the judges said.

The 109-year-old paper, rescued from closing when Zaitz’s family bought it in 2015, faced the wrath of the state in uncovering the prize-winning story. It began when a man driving on the wrong side of the road crashed into another car in remote southeastern Malheur County. The other driver was killed; his wife was injured. In the back of the wrong-way driver’s car, authorities found the body of a woman he had kidnapped.

Zaitz and his other two reporters, John Braese and Pat Caldwell, uncovered that this man was free despite having been sentenced, two decades ago, to 70 years in state jurisdiction for kidnapping another person. The state psychiatric board had ordered him freed based on 218 exhibits presented at an evaluation hearing.

The state board wouldn’t provide those exhibits. The paper appealed to the state attorney general’s office, which ordered their release. The state board, under a quirk in Oregon law, instead sued the paper, intending to force it to drop the request rather than pay high legal fees.

“They didn’t count on us jumping in the ring with them,” said Zaitz, a retired investigative reporter from The Oregonian, the state’s biggest paper. With the public support of other Oregon newspapers and a Seattle Times columnist, the Enterprise turned to the crowdsourcing site Go Fund Me on a Sunday to raise $20,000 for its legal defense. Donations came in from Oregon and throughout the nation. By Tuesday morning, the governor intervened, ordering the state board to provide the information and drop the lawsuit.

The matter setted, Zaitz called off the crowdsourcing drive, but several of those people who pledged became supporters. The battle helped the Enterprise gain hundreds of new subscribers and raise $16,000 to pay for two interns this summer. Another win: The Enterprise got another full-time reporter for a year, paid for by Pro Publica, to go further on its investigations.

“Communities want their journalists to ask hard questions and to get beyond meeting coverage and daily stories,” Zaitz said. “We are building a brand here based on tough, enterprise reporting. If we can do it in Vale, Oregon, then there’s no excuse for anyone anywhere not to do it.”

He said the hard work of his staff prompted him, between chores one weekend, to fill out the IRE award application. “I wanted the staff to know that they were worthy. Did I think we’d win? Heavens, no.”

Apuzzo, the IRE judge, said Zaitz pranked him when he called and identified himself as being from the Times. Zaitz immediately interrupted him. “The Times? Well, you’re going to have to talk to my lawyer.”

The official announcement Monday came just ahead of the Enterprise’s weekly deadline. The staff put in the story and finished the edition, resolving to celebrate later. There’s no money with the prize, but Zaitz notes it comes with a gold medallion.

“We’ll drill a hole in it at the top,” he says, “and take turns wearing it on a necklace.”

Here is the full list of IRE award winners, and the Enterprise’s prize-winning investigation. Today is the 50th anniversary of the assassination of Martin Luther King Jr. in Memphis. Here are Wednesday's front page from the New York Daily News, focusing on King's fight against policy brutality, and selected readings from various sites: 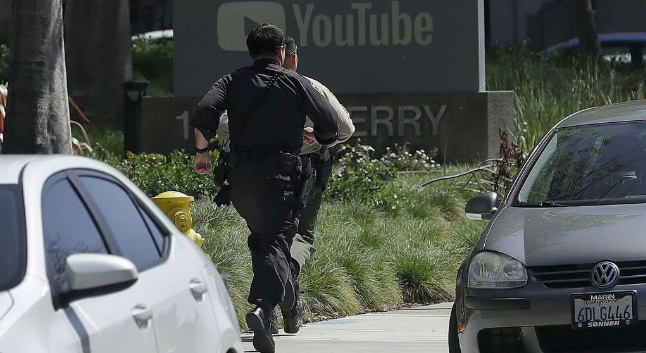 YOUTUBE SHOOTING: A woman with a gun entered YouTube's Bay Area headquarters on Tuesday afternoon, shooting and wounding three people before turning the gun on herself. The  shooter was identified as Nasim Aghdam, a disgruntled video maker who had been complaining that YouTube was filtering her videos and depriving her of money, the San Francisco Chronicle reported.

ATTACKS ON JOURNALISTS IN THE U.S.: A press rights’ group, in a report released Tuesday, counts 45 attacks on journalists in America last year and 34 arrests (29 of them at rallies or protests). That’s not all, says Sarah Matthews of the Reporters Committee for Freedom of the Press. “Journalists faced significant verbal attacks from government officials that often coincided with death threats from members of the public,” she said. “These incidents have a chilling effect on newsgathering.”

NYT CIVIL WAR?: It's not the North against the South or the Hatfields vs. the McCoys. But Vanity Fair says the Eighth Avenue Freeze-Out at Times headquarters is between Olds and Youngs. Joe Pompeo quotes one Times employee as saying: “The Olds feel like the Youngs are insufficiently respectful of long-standing journalistic norms, or don’t get that things are the way they are for a reason. The Youngs feel like the Olds are insufficiently willing to acknowledge the ways in which the world and media landscape have changed, and that our standards and mores should evolve to reflect that.” My $.02? Whatev, just make deadline.

FACEBOOK CRACKS DOWN: FB Security Chief Alex Stamos announced that the social network had taken down 70 Facebook and 65 Instagram accounts — as well as 138 Facebook Pages — that were controlled by the Russia-based bot factory known as the Internet Research Agency. Stamos, in a blog post, said he expected to close down more of those accounts. The agency, he says, “has repeatedly used complex networks of inauthentic accounts to deceive and manipulate people who use Facebook, including before, during and after the 2016 U.S. presidential elections.”

PAY TO PLAY: Can an A-list be for real if you have to pay $4,000 to be on it? That’s what Travel + Leisure is charging people who want to be on its A-list of travel agents. Wendy Perrin, who founded a Conde Nast Traveler version of the list in 2000, told Skift that she never had a play-to-pay setup, and hoped that T+ L “will rise above issues of dollars and cents” and not put anyone on the list who is not deserving.

TOO MANY DUDES: Why are 4 of every 5 subscribers of the Financial Times men? Renée Kaplan, the FT’s audience development chief, found a dude-heavy opinion section turned away women, who overindexed toward management, professional guidance and service industry stories. Now the FT has real-time tracking of which stories women are reading the most, Kaplan tells Laura Hazard Owen of Nieman Labs.

FOX NEWS: For the first quarter, FNC was the most-watched basic cable network. Sean Hannity was the most popular talk show host, although he lost to MSNBC’s Rachel Maddow in the key 25-54 demographic. Both Tucker Carlson and the currently vacationing Laura Ingraham dominated their time slots, AdWeek reported. That said, Fox News’ viewership was down 16 percent from the first quarter of 2017, a record quarter for the network as the Trump administration settled into office.

MORE MURDOCH: In a nutshell, Disney has offered to buy Sky News in Britain, which fears overall Sky Broadcasting owner Rupert Murdoch has too much influence over UK media. That will help Murdoch achieve full control of Sky worldwide. Why would Disney do that? Oh, because it has a side deal to buy many of the assets of Murdoch’s 21st Century Fox. Dizzy yet? The NYT’s Michael J. de la Merced explains. THE WRONG MAN: A Massachusetts man sued Alex Jones and his conspiracy theory site Infowars for more than $1 million, saying he was falsely identified as the high school mass shooter in Parkland, Florida, in a photograph of him on the site. His lawyer said it appeared Infowars chose the man to politicize the incident, because he was wearing a shirt called “The Communist Party.” The image misidentifying him as a mass killer remained online for at least five hours, the Times reported.

A MASTER AT WORK: Few columnists can do what the Boston Globe’s Kevin Cullen does. From his latest: "Luke sat at Nyall’s bedside before he died and promised his big brother he would look after Kathleen and Dylan and the baby that will be born at summer’s end. … Nyall Sheldon got 32 years on this earth, which seems terribly short and unfair, but he made every minute count." (Hat tip: Indira Lakshmanan.)

CANADA WELCOMES HER: A forced marriage in Afghanistan. A husband who beat her and shot her in the face. Nine reconstructive surgeries and an offer to live in the United States. After the U.S. reneged on its agreement, Canada took in Shakila Zareen, 23. She speaks to the Guardian from her new home in Vancouver.

A FOUR-DAY WORKWEEK?: New Zealand is experimenting. If productivity rises significantly, it may expand.

THE VOTE FOR 16-YEAR-OLDS: There’s a growing movement, apart from the March For Our Lives rallies, to lower the voting age, Kara Voght reports.

A NEW APPROACH: After Tuesday’s shooting at YouTube headquarters, Nicholas Kristof tries a different way to advocate for gun safety, engaging directly with the arguments made by gun advocates.

AND, FINALLY: What does novelist Celeste Ng think about a lot? A failure of empathy. This Twitter thread may make you think differently about your day. (Hat tip: Neil Parekh.)

Got a tip, a link, a suggestion? Please email me at dbeard@poynter.org.

Here are the winners of the 2021 Pulitzer Prizes

The Pulitzers, regarded as one of the highest honors in journalism, were announced later than usual this year due to the pandemic.

Behind the Pulitzers: A look into the inner workings of journalism’s Super Bowl

A Pulitzer Prize judge, board member, finalist and winner pull the curtain back on the prestigious award process

Coronavirus and race (and not Trump) dominate the 2021 Pulitzer Prizes

After five years of the news cycle being dominated by the president, Trump-related stories were scarce among Pulitzer finalists and winners.

BuzzFeed News might have won the Pulitzer celebration contest with an empty newsroom. Here’s the best of this year’s commemorations.

Jaden Edison
Back to News