Then, Ortega recounted, Arthur looked at him and said, “If you like them so much, why don’t we just do one?”

Today, the two Sun Sentinel journalists, amid daily work on hurricanes, an airport shooting and the fallout from the Parkland massacre, are behind what has suddenly become one of America’s top podcasts. Within eight hours of its release on April 3, “Felonious Florida,” focusing on a famous triple-killing in the 1990s, leaped to the top of the iTunes podcast charts. It stayed there for another eight days.

Neither Arthur nor Ortega had produced a podcast before. Neither had a supervising editor, nor the video editor and photo editor who worked as sound engineers, voice coaches and selectors of music. The team did contract out for ad sales and marketing to Wondery, which co-produced the popular “Dirty John” podcast with the Los Angeles Times.

Arthur, the host for the first set of episodes, exudes an unpolished, genuine quality as she tells the story of a charismatic club-owner and two women who joined him at home one morning — before crime burst through the sliding patio door. Part of the appeal of the series, Arthur says, is geography. “Florida’s just such a nutty place,” she says. “I think it’s the lack of shade trees.” 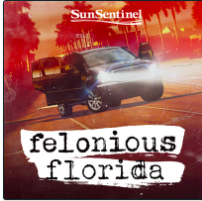 David Schutz, a Sun Sentinel assistant managing editor, says listening to months of true crime podcasts helped him in shaving run-on sentences and extraneous clauses from the scripts — and diverting from strict linear storytelling. One thing they added: Cliffhangers.

More than 500,000 people have downloaded “Felonious Florida” so far, and 85 percent of the reviews are positive or extremely positive, Schutz says. The podcast, he says, is attracting a whole new audience for the Sun Sentinel: Nine percent of its listeners come from abroad, and its top U.S. markets are New York, Chicago, San Francisco and Atlanta. The Miami-Fort Lauderdale area is No. 13.

“This podcast will come out in the black, but more significantly, what we’ve gained is a new brand,” says Schutz, who encourages other newspapers and news sites to take the leap.

Mark Zuckerberg has left Washington. Here are the stories he left behind:

THE GUN FRONT: Vermont's governor raised the age to 21 for buying guns and banned high-capacity magazines. Bank of America said it would stop lending to companies that made military-style weapons for sale to civilians. And a Pennsylvania school district faced ridicule when it distributed nearly 500 mini- souvenir-style baseball bats to teachers for possible use against a school shooter.

TRIBUNE JOURNALISTS ORGANIZE: Staffers at the Chicago paper became the latest journalists nationwide to announce their intent to unionize. The announcement, which featured low-key testimonials from columnists Eric Zorn and Mary Schmich, said the staff wanted greater involvement in the future of the news outlet. If employees vote for a union and it is certified, it will join papers such as The New York Times, Washington Post, Wall Street Journal and Los Angeles Times will representation from the Communications Workers of America and the Newspaper Guild.

AWARDS SEASON: The Marshall Project and the Washington Post won this year’s Dart Awards for Excellence in Coverage of Trauma. The judges said the Marshall Project’s "We Are Witnesses" project captured the enormity of the court-prison complex while keeping readers and viewers connected to individuals. The judges also hailed the Post’s John Woodrow Cox for his series on gun violence seen through the eyes of children. On Tuesday night, Cox accepted another award for the series. The Meyer “Mike” Berger Award is awarded by the Columbia Journalism School to reporters who produce “an outstanding example of in-depth, human interest reporting.”

LEAVING: The dean of Northwestern University’s journalism school is leaving that post at the end of the academic year. Bradley Hamm, who joined the Medill School of Journalism, Media, Integrated Marketing Communications in 2012, will be taking a yearlong sabbatical and returning as a tenured professor, the university announced. No successor has been named.

IF THINGS GET DICEY: Here are new guidelines for reporters covering civil unrest. “The best defense against being arrested is to know and follow the law, but newsrooms should also prepare their teams for the possibility of arrest by developing a protocol,” says the Radio Television Digital News Association. In releasing these guidelines, the RTDNA notes that 31 of 45 reported physical attacks against journalists in the United States came during a protest.

LOCALIZE THIS: A student reporter in Nevada builds her audience by working for a university-based Spanish-language site — and getting her stories on the English-language public radio affiliate. Here’s how it’s done in Reno, via Natalie Van Hoozer for the International Journalists’ Network.

JAILED FOR DOING THEIR JOB: A story about a government massacre and an effort to drive hundreds of thousands of people from their homes could be a prize-winner. These two Reuters journalists got the story, but they have been jailed for months in Myanmar. Their imprisonment has been condemned by journalists, human rights advocates and governments worldwide. The NYT’s Richard Paddock reports on their case.

PROPHETIC?: Her dissertation was on authoritarian dictatorship. These days, Sarah Kendzior is making her way into mainstream media, as many of her warnings about President Trump have come to pass, writes Tony Rehagen for CJR.

WATCHING YOU: Two reasons why Homeland Security’s new media monitoring center may be troubling: It’s being driven by the main civilian cybersecurity authority and done in partnership with the new Vetting Center (as in “extreme vetting”). By Gabe Rottman of the Reporters Committee for Freedom of the Press.

DOG FIGHT: Canine rescuers long have lambasted commercial dog breeders as irresponsible, profit-hungry and inhumane. But a Washington Post investigation shows that some rescue nonprofits, flush with donations, have been taking part in “dog auctions” where no cameras are allowed — enriching the very same breeders.

QUESTION AUTHORITY: That’s just one of seven steps journalists should take to ensure that they are not using double standards to report on extremist violence, the Asian American Journalists Association says. Other highlighted tools from this broader report: Focus on context, dig deeper for details, define terror, and ask if race/ethnicity/national origin/religion is relevant to the case.

FOLLOWUP: Just hours before Paul Ryan’s decision to leave Washington, a documentary aired quoting Sen. Jeff Flake, Rep. Charlie Dent and others on how President Trump took over the Party of Lincoln and made it the Party of All About Me. This link to FRONTLINE’s “Trump’s Takeover” has a twist: The ability to toggle from a quote on the screen to a page with a transcript showing the full context of that quote — and other background.

THE REST OF THE STORY: Three months ago, New York Times journalist Liam Stack tweeted that an 11-year-old daughter of his cousin loved the Washington Post app. The Post, through its main Twitter account, invited her to drop by, said it would be happy to work for her someday, even told her where editor Marty Baron kept the M&Ms. So on Wednesday morning, The Post tweeted a followup: 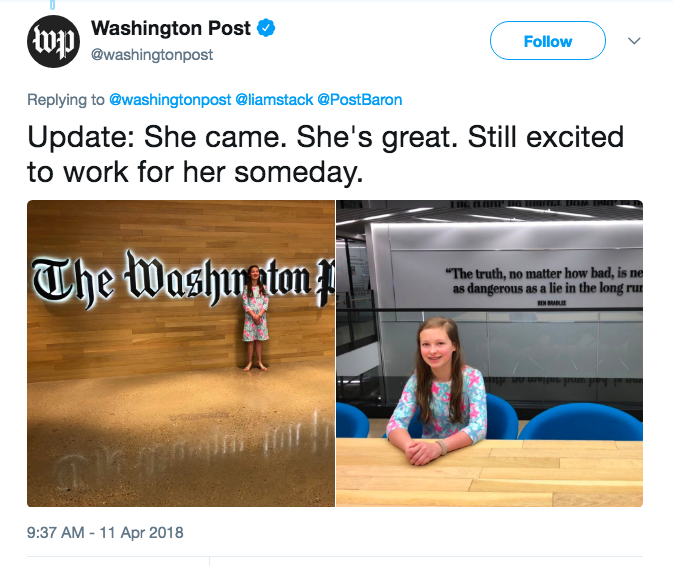 We’ll let you know if she got the M&Ms.

Got a tip, a link, a suggestion? Please email me at dbeard@poynter.org.

The Texas Observer does fearless work, said Pauly Denetclaw, who started in September

Trump posted a 37-minute clip of his interview with '60 Minutes' correspondent Leslie Stahl to his Facebook page Thursday.

Disinformation or defamation? Attacks against Trump and Biden resemble those seen in other countries

Cristina Tardáguila
Back to News