COVID-19: Poynter Resources
Home Newsletters How the media did in covering this weekend's shootings

How the media did in covering this weekend’s shootings

This is the Poynter Institute’s daily newsletter. To have it delivered to your inbox Monday-Friday, click here.

We begin this week in the aftermath of the weekend’s mass shootings in El Paso, Texas, and Dayton, Ohio. Here’s a look back at the coverage and the media’s role, and a personal note.

When tragedy strikes our nation, we as citizens instinctively look to the media. We turn on our TVs and go to the internet to first get information: Who? What? Where? How? How many?

As we try to wrap our brains around what happened, we then look for comfort and community, and the media tries to answer a much more difficult question: Why?

It’s here where the media arrives at a crossroads, especially when it comes to mass shootings, because that often leads to the most difficult question of all: Who or what is to blame?

In the aftermath of the mass shootings in El Paso and Dayton, the media soon arrived at the great debate that now follows every one of these all-too-familiar scenes. The topics discussed Sunday involved President Donald Trump, racism, mental illness, gun control —the usual suspects that will continue to be debated in the days, weeks and months to come.

The question is: What role does and should the media play in all this? In her column Sunday, the Washington Post’s Margaret Sullivan asks the key question: “Can the news media really go on a righteous crusade about gun laws — or about identifying white supremacy — while maintaining their roles as truth-tellers?”

The media can meet its obligations as a public servant by going on a crusade to do what it does best: ask questions. It can invite our political and community leaders — as well as respected pundits — to answer those difficult questions of why these things happen and who is to blame and how to fix it.

The media can set an agenda by forcing our leaders to set an agenda. To do that, these difficult topics can’t be discussed only in the hours following these shootings — when emotions and divisiveness are at their most volatile — but in the weeks and months after that.

Anchoring from the scene 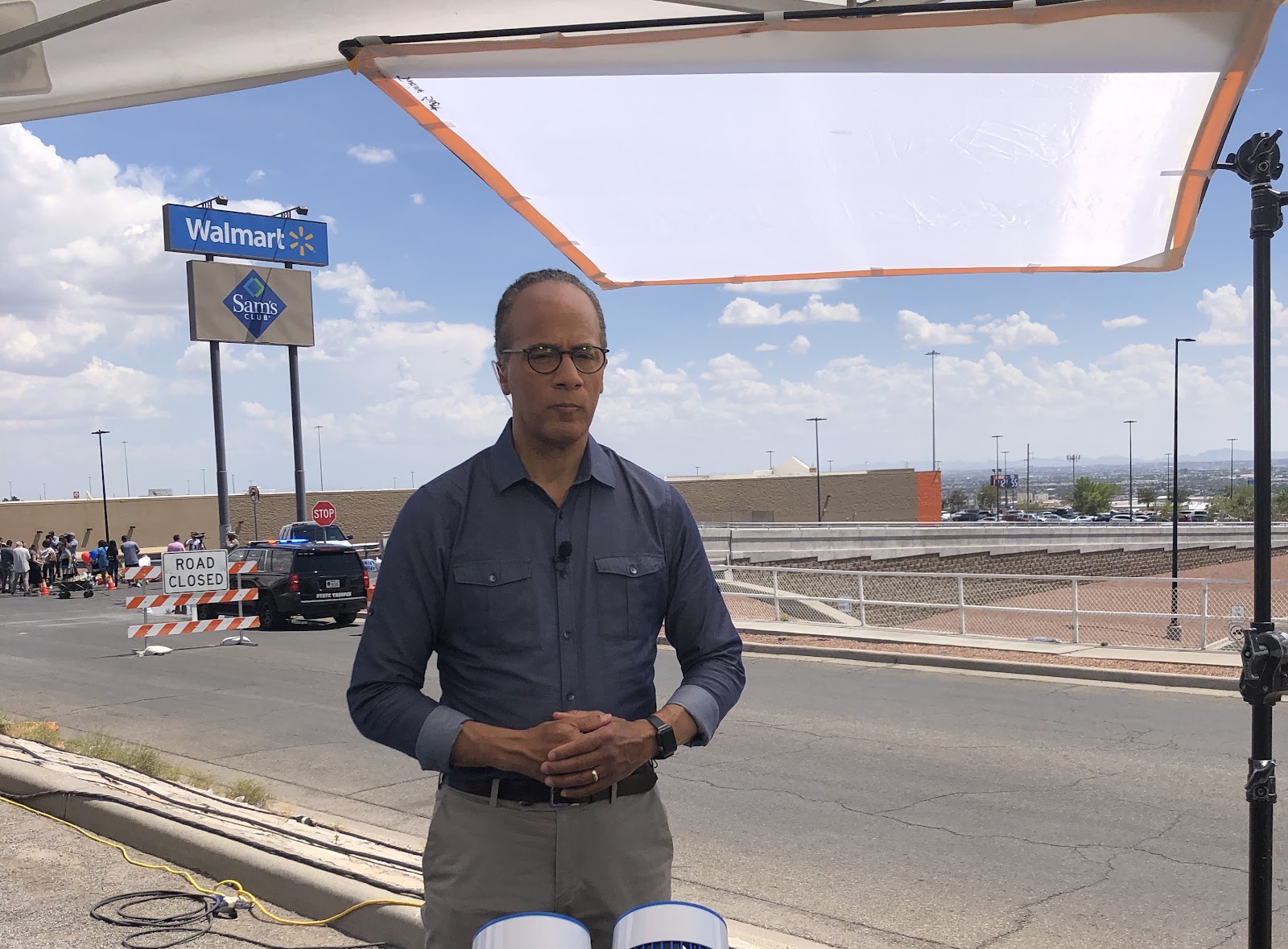 NBC and ABC spent the first half of their broadcasts going over the details of the shootings, but then both drew a line from the El Paso shooting to criticism of Trump’s past comments about Mexican immigrants. Both networks delivered that message by showing reactions from the Democratic presidential candidates, who were critical of Trump. ABC showed the clip from three months ago when Trump laughed during a rally when someone from the crowd yelled out, “Shoot them,’’ when Trump asked what could be done to stop immigrants from entering the country.

Holt ended his Sunday broadcast by saying, “Outrage, sadness, grief and anger, and pure numbness are among the emotions our country is wrestling with tonight. We are long past the days when we say, ‘It can’t happen here.’ El Paso is here. Dayton is here. Gilroy is here. We’re all tired, tired of watching communities like these go through the well-worn rituals of shock, pain, vigils and talk. Lots of talk and few answers. We’re tired of asking why, but there is too much to lose for us to succumb to numbness and despair. What we can’t forget is that this, sadly, is common, but it is not normal. And that should give us hope.”

O’Donnell also closed her special evening news with a commentary, saying, “After decades of mass shootings, we haven’t found the answer. … We will not live in fear. That would be admitting defeat. Among the four freedoms laid out by Franklin D. Roosevelt is freedom of fear. He called it an essential human right and it is one we cannot afford to surrender.”

‘I can give less than a damn what (he) thinks’ 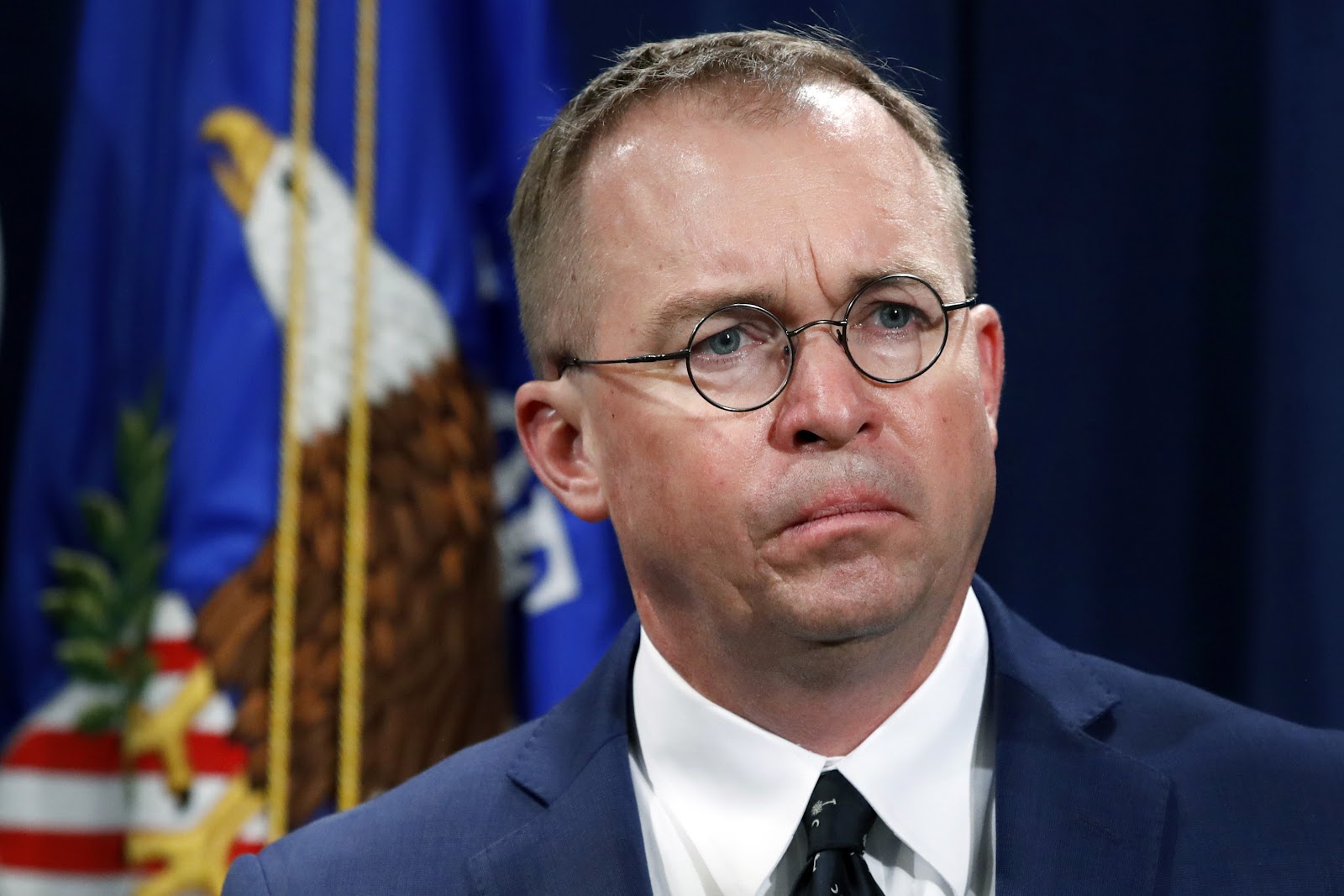 All the Sunday morning news shows pivoted from their original plans to focus on the shootings. Various Democratic presidential candidates — including Beto O’Rourke, Julian Castro, Cory Booker, Pete Buttigieg — among other politicians appeared on the shows. All the shows had roundtable discussions about the shootings.

Acting White House Chief of Staff Mick Mulvaney appeared on both ABC’s “This Week” and NBC’s “Meet the Press.” On “This Week,” he said, “There’s not benefit here to try to make this a political issue. This is a social issue and we need to address that.”

But it was Mulvaney’s appearance on “Meet the Press” that caused the biggest stir. Mulvaney started by ripping into the “MTP” panel, including NBC news contributor Eddie Glaude Jr., who was critical of how Trump has spoken in the past about immigration and race.

Mulvaney said, “I know this is a political show, but the level of rhetoric in the last 20 minutes — I hope someone else is bothered by it other than me. I mean, we’ve moved straight past any sympathy at all for the victims, straight past going into what caused this, and trying to figure out who’s to blame. So I’ll ask this question: Was Bernie Sanders responsible for when my friends got shot playing baseball? I don’t think he was.”

When moderator Chuck Todd returned back to the panel, he said that Mulvaney was “clearly” reacting to Glaude. To which Glaude said, “First of all, I can give less than a damn what Mick Mulvaney thinks about what I say, to be honest with you. He can’t even acknowledge that it was a domestic terrorist act.”

Dallas paper: Do we print his name on 1A? 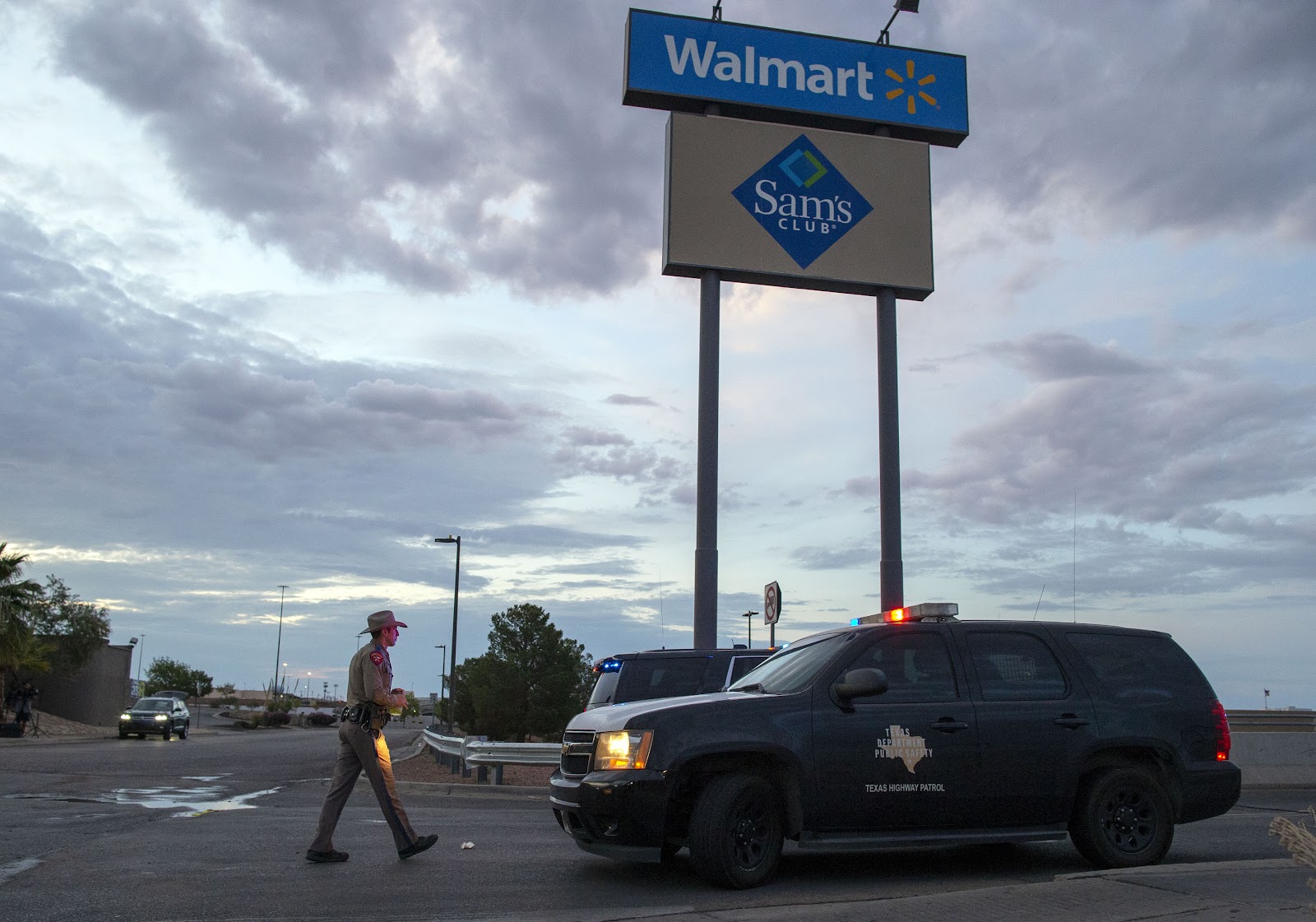 A Texas State Trooper walks back to his car while providing security outside the Walmart in El Paso, Texas. (AP Photo/Andres Leighton)

One of the topics that often comes up when there is a mass shooting is whether or not news outlets should name the shooter. Typically, the media print or air all pertinent facts and many would argue they have an obligation to share everything they know with their audience, including the name of the shooter. On the other hand, there is a fear that printing the name glorifies the shooter and publicizes any agenda that shooter might have had. (Poynter’s Kelly McBride recently wrote about this topic.)

On Saturday night, Mike Wilson, the top editor of the Dallas Morning News, tweeted out the front page of the paper’s Sunday edition and wrote, “His identity is already widely known, so it’s a small thing, but it still feels right: We are not putting his name on the front page.”

The suspect was from a Dallas suburb and the DMN did print his name on the inside pages. On Sunday, I traded emails with Wilson, starting with me asking him about keeping the shooter’s name off the front page. Wilson told me he met with managing editor Keith Campbell not long after the shooting and before the name of the shooter had been confirmed. Then they learned the suspect’s name and where he was from and they knew they would print his name in some of their stories because, Wilson told me, “our readers would want to know if they knew him or his family, and they’d want to understand his story.”

But Wilson and Campbell decided against putting the shooter’s name on the front page.

“We were determined to focus our coverage on El Paso, on people who were targeted for murder for racist reasons, and on the response of policymakers,” Wilson said. “Even in this digital age, the front page is an important symbolic representation of what we think readers should know on any given day. So while it was necessary to run his name and picture deep inside the paper, we made a statement by not putting them on our most important page.”

Wilson said the fact that the shooter was from Dallas made the decision a “little more challenging.”

“It is easy to minimize the name of an anonymous person committing a crime in a faraway city because nobody here knows that person,” Wilson wrote. “Some of our readers may have expected to read his name and see his picture on 1A. But honestly, the bigger challenge was to fight our own reflexive impulse to play up the local part of the story. If the person involved had been prominent in some way — that is, if his identity were somehow central to understanding the story —  we might well have put his name on 1A.”

GateHouse and Gannett close to a merger 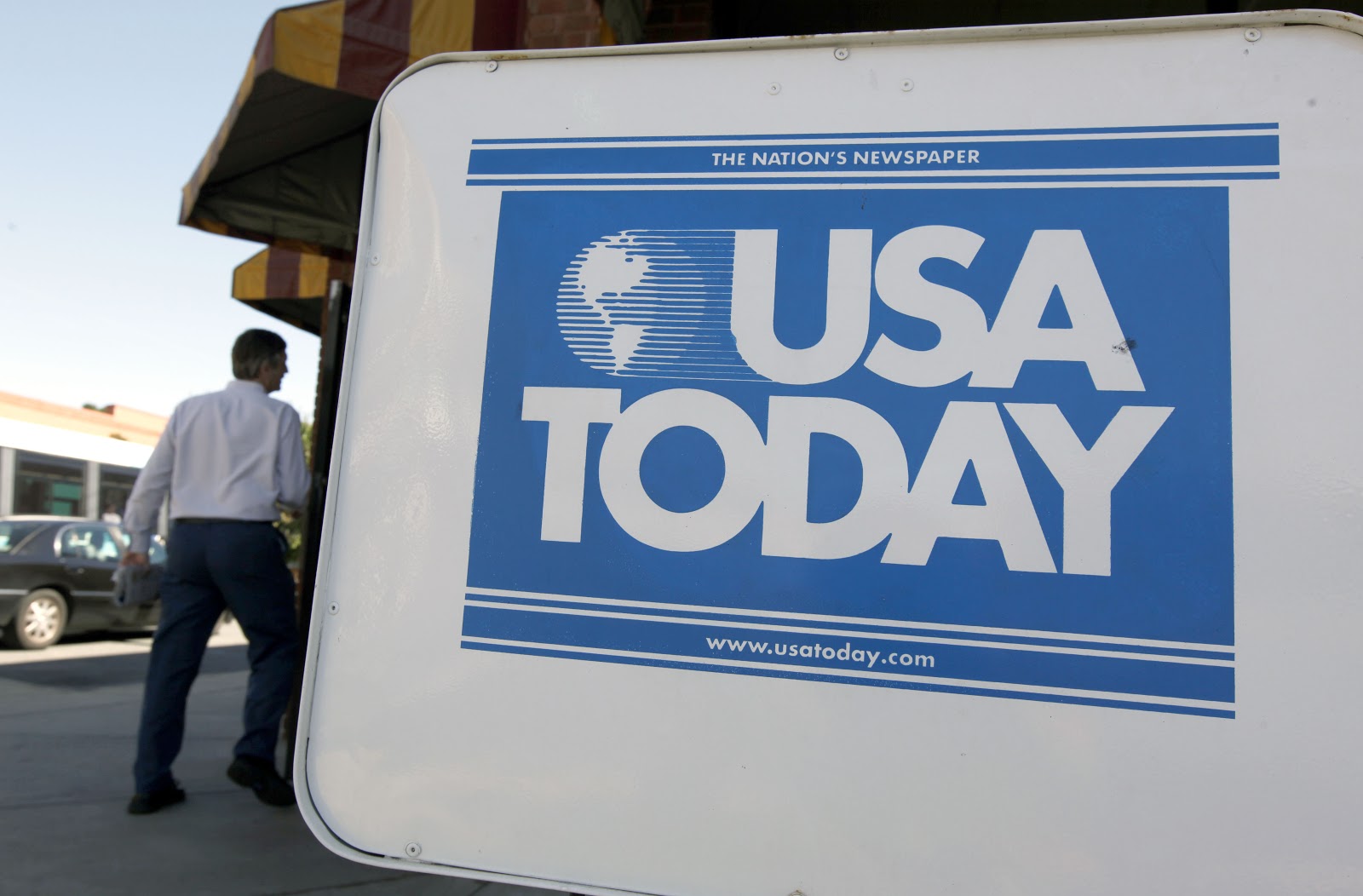 The country’s two largest newspaper chains — GateHouse Media and Gannett — are expected to merge soon, perhaps as early as this morning. According to industry analyst Ken Doctor, the new company would end up owning 265 daily papers and thousands of weeklies. It would make up one-sixth of all remaining daily newspapers with a print circulation of 8.7 million. The next closest would be McClatchy with 1.7 million.

Poynter’s media business analyst Rick Edmonds has a good breakdown of what we know, what we don’t know and what it all could mean as we get ready for one of the biggest mergers in recent media history. 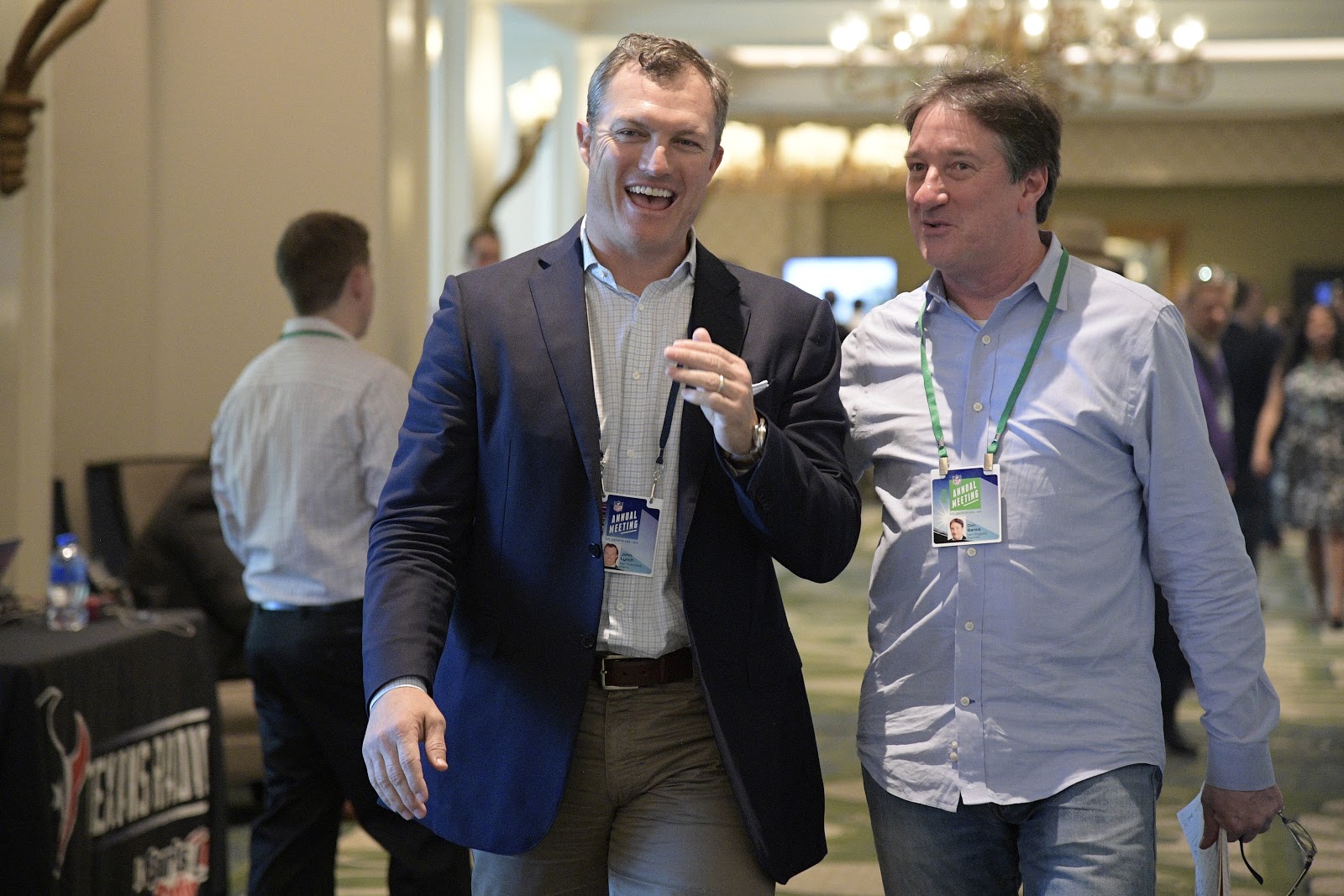 This is devastating news not only for the journalism world, but for me personally: Longtime NFL writer Don Banks, who just started a new job with the Las Vegas Journal-Review, died in his sleep on Sunday in Canton, Ohio, where he was covering the Pro Football Hall of Fame inductions. He was 57.

Don and I were colleagues at the Tampa Bay (then-St. Petersburg) Times for many years and, living around the corner from one another, spent countless nights watching baseball, having a few cold ones and most of all laughing until our sides hurt. When my wife and I brought our first born home from the hospital 26 years ago, Don was waiting in my driveway with a video camera to commemorate the special moment. Our friendship then traveled to Minnesota. With his endorsement, the Minneapolis Star Tribune interviewed and eventually hired me to be the first beat writer of the Minnesota Wild hockey team. I owe Don more than he ever knew.

Most football fans will remember Don for his outstanding work at the St. Pete Times, Star Tribune, St. Paul Pioneer Press, Sports Illustrated, Patriots.com and The Athletic. His “Snap Judgements” NFL column became an absolute must-read. Everyone who knew him will remember him for being a good man. His longtime friend, the NFL writer Peter King, wrote a touching remembrance, as did Jenny Vrentas for SI.com.

I will remember him for being a loyal friend whom I could count on for any favor, to crack me up with an imitation or observation, and someone to spend the evening with talking about everything or nothing at all.

Clarification: Last week, I wrote about a new podcast coming this fall called “Dolly Parton’s America.” To be clear, Parton is not a co-host on the project. It’s a production of WNYC Studios and Jab Abumrad. Parton is the subject of the podcast.