Library-trained researcher Alice Crites has been a part of a half-dozen Pulitzer teams. Her latest was announced last week, for an investigation of Senate candidate Roy Moore of Alabama. The year before, she worked with David Fahrenthold on the Post’s Pulitzer-winning investigation of Donald Trump’s charitable giving.

Crites, along with editorial research colleagues such as frequent Pulitzer winner Julie Tate, has been at the backbone of Washington Post national, political and national security investigations in recent years. She also was on teams that won for investigating the unusually high number of D.C. police shootings (1999) and finding abuse and neglect of citizens in homes for the mentally impaired (2000). She worked with winning reporters on the bribery case, charges and conviction of GOP lobbying Jack Abramoff (2006) and for lapses in Secret Service security, particularly around a presidential visit to Cartagena, Colombia (2015).

This year, one of Crites’ key moments came with her growing suspicion that something the Post was being fed was NOT news — a salacious, and fictitious, account being peddled by a right-wing group to sabotage the Post’s legitimate reporting and reputation. She shared in the byline of that report about how an outside group had planned to fool them, and the Post's painstaking reporting and efforts to confirm information, which ended up burnishing the paper’s reputation. It also shed a light on the team, which included Stephanie McCrummen, an Alabama native who began the work on Moore, and Beth Reinhard, a veteran political reporter just starting at the Post. Editors David Finkel and Eric Rich respected and challenged them, Crites said.

In the heat of the story, Crites’ work fended off accusations from furious Moore supporters as the accusations of then-teen girls against the much older Moore multiplied. Moore backers at one point said the Post wrongly had an accuser’s family still living in the area in 1979. Crites produced a story from a 1980 break-in showing the family was still at its local address even a year after that.

“They were so mad they said the Washington Post was a worthless piece of crap, and I kind of liked that,” she says.

Crites’ research also refuted a direct Moore challenge. The candidate disputed an account that he fed liquor to an accuser, saying the county didn’t sell alcohol. Crites produced evidence that the county had begun allowing liquor sales seven years before the incident.

Crites, the daughter of an NIH cancer researcher and a librarian for the Montgomery County Schools, said she always was a news junkie, but the idea of being a librarian “never occurred to me.” She studied Chaucer and got a master’s in literary criticism at Carnegie-Mellon before finding herself back in Washington, looking for work.

She started working as a clerk at the Library of Congress, went to the library and information sciences school at University of Maryland and learned to find key materials before VuText, Lexis/Nexis and other search vehicles existed. With her knowledge of legislation and current events, she began working a weekend shift at the Post in 1990 and was hired full-time in 1992.

Over the years, researchers and reporters have gotten more collegial and able to partner. Part of that teamwork, she says, is a need for speed as well as accuracy. “In the Politics pod, you don’t have that many one-person stories anymore,” she said. “We don’t compete with the reporters; we partner with them.”

The award comes in a year when library-trained news researchers exposed a senior White House aide (Rob Porter) for his assaults on his former wives and came up with numerous scoops on Russia’s disinformation factory and its role in the Trump-Clinton election.

Speaking of libraries: Could there be journalists embedded in them? 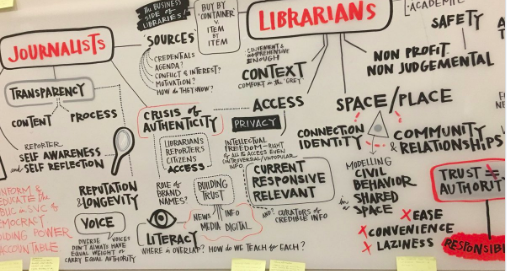 Through much of the nation, local newspapers and news sites have shrunk or simply departed, and some libraries have begun, gingerly, to fill the vacuum. Some librarians have been adding non-library events to weekly newsletters, and in one case, the town librarian also became editor of its weekly publication. The conference brainstormed ways to expand libraries’ role as fact-checkers and consider its place in encouraging or “co-creating” local news content.

“Why the heck would libraries want to work with journalists?” asked Rafael Lorente, an associate dean of the University of Maryland’s Philip Merrill School or Journalism.

“The library needs a current collection of content,” answered Mary Minow, a library leader and current Harvard Berkman Klein fellow. “Without current content that the public trusts, we have nothing.”

One oft-cited reason to work together: polls show high levels of trust of librarians from Americans of all ages. Dustin Fife, director of library services at Western State Colorado University, says he finds little notion from the public of what librarians do. “Are we beloved,” he asks, “because we are mythologized?”

We’ll keep reporting on this topic down the road. Here are a few of the stories you may need to know today. 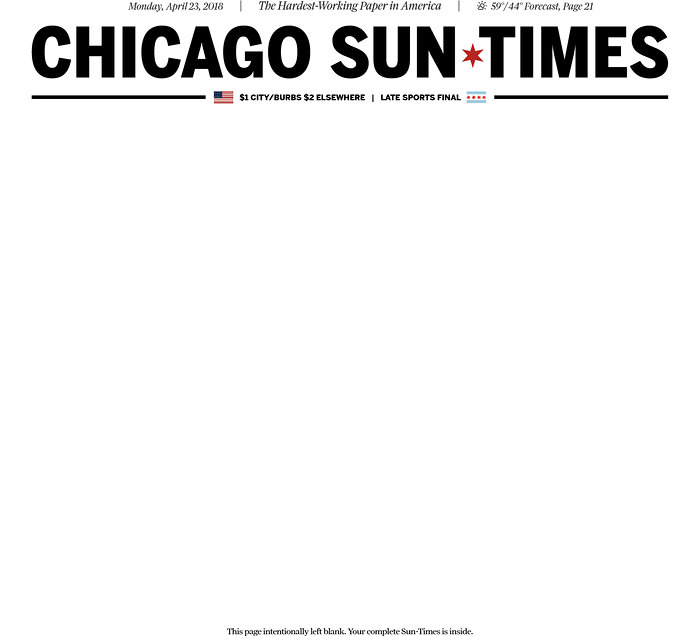 NO NEWS IS: ….not good news, at least for the 174-year-old Chicago Sun-Times. The tabloid published a blank front page on Monday, urging readers to subscribe digitally for $7.49 a month or face the prospect the news outlet would close.

VICE LAWSUIT: The journalist was sexually assaulted by a group of men while on assignment. VICE, she alleges, blamed the attack on her and ultimately forced her out of her jobs, NBC News’ Brandy Zadrozny reports. Zadrozny, in her previous job as researcher-reporter for the Daily Beast, had a series of stories on sexual harassment and misconduct at VICE.

LOW PROFILE: YouTube content is still awash in Nazis, pedophilia and conspiracies, but YouTube has stayed relatively quiet during the last period of Facebook-bashing. It’s time could come, reports Lucia Moses of Digiday. “We think there are enormous issues with YouTube and privacy and Google more broadly,” said Josh Golin, executive director of the Campaign for a Commercial-Free Childhood, which earlier this month called on the Federal Trade Commission to investigate YouTube for illegally tracking kids. … Separately, Christopher Mims asked in the Wall Street Journal that if Google has collected more personal data on us than Facebook, why aren’t we talking about Google?

WATCHING YOU: For generations, aspiring BBC journalists faced a hurdle beyond the “old-boy network” and, oh, merit. British spies reviewed job applicants until the 1990s, the BBC itself reported. The practice had been denied for decades. For what reason was British internal security allowed to infiltrate the process? To weed out potential “subversives,” the BBC reported. "Policy: keep head down and stonewall all questions,” a BBC official wrote in the 1980s. Note: It is widely believed former BBC producer George Orwell modeled hell in “1984” — Room 101 — after a similarly numbered room at Broadcasting House in London.

PROMOTED: Danyelle S.T. Wright to the newly created role of vice president, employment and labor law, and chief diversity officer of E.W. Scripps Company. In this role, Wright will lead Scripps’ enterprise-wide diversity and inclusion strategies. She will work closely with human resources leadership to bring these strategies to life. Wright will continue to serve as the employment attorney for the company, a role she has held for three years.

UNCLE SAM WANTS YOU: With unemployment rates low and only 1 of 4 Americans from 17-24 eligible for recruitment, the U.S. Army is marching to enlist former inmates. “When recruits are hard to come by, standards previously considered sacrosanct get waived,” Retired Army Col. Andrew Bacevich told The Daily Beast. “Offering waivers to convicted felons suggests that the services — probably the army in particular — are struggling to meet their quotas of warm and willing bodies. As to whether military service offers a way to turn your life around, there's no easy answer. For some, sure. For others, it's probably a dumb idea for the individual and for the service.”

BIAS? WHAT BIAS?: Four times more blacks than whites are suspended in this Texas school district. The investigation has been dropped by the Trump administration, ProPublica reports.

AFFLICTING THE AFFLICTED?’: The choice that Wisconsin is forcing upon its poor: Choose between feeding your family and the rundown car that could someday get you to a job. By Robert Samuels. (Hat tip: Beth Reinhard)

IMPROVING AMERICA:  A ProPublica analysis found clear ways to better the U.S. asylum-seeking process, from moving immigration courts out of the Justice Department, to giving asylum-seekers greater access to lawyers and more resources to process refugee claims faster. Another basic change: update the definition of a refugee to include modern conflicts. That said, all sides acknowledge some, but not large-scale, abuse. “If you are going to make a mistake in the immigration area, make this mistake,” Bill Hing, director of the University of San Francisco’s Immigration and Deportation Defense Clinic, told Kavitha Surana. “Protect people that may not need protecting, but don’t make the mistake of not protecting people who need it.”

THE WAITING GAME: Sometimes, the humdrum (and the horror) of a refugee journey works best as a game "participant." A decade ago, I sweated out the fate of a woman and a child in a decade-old “game” set in the Sudanese famine, giving me much greater understanding of the South Sudan. With the ProPublica asylum story (above), the news site wove in images, text and sound to re-create five actual refugee journeys. It's gripping journalism, by Sisi Wei, Nick Fortugno and WNYC. Pictured on this odyssey: Egypt. Central America. Mexico. A gun.

What we're listening to 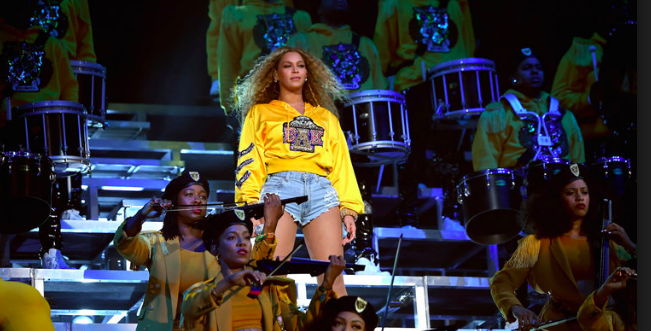 IT’S BEYCHELLA, MOMS: The public radio show The Takeaway turned into a nationwide daughter-mother intervention as Vulture’s Hunter Harris explained the most important female singer and media figure in the world to her mom, Yvonne Lewis, who has seen Queen Bey as a propitious follower of the brave paths cut by Patti LaBelle and Whitney Houston.

Beychella, however (Beyoncé’s triumphant cultural cornucopia at the Coachella Music Festival), moved Mom from her days of banning certain Destiny’s Child tracks in the Mazda. "From the back of the bus to the forefront of social media, fractured voices now sing in unison with Beyoncé leading the chorus" Lewis concluded, on air.

Have a good Tuesday.